On China, the administration has so far taken a measured approach that has reduced the market concerns about protectionism that arose during the campaign when Mr. Trump said he would quickly slap unilateral tariffs on China.  Mr. Mnuchin said that the Treasury will conduct its usual twice-yearly currency review in April about whether to name China as a currency manipulator, which in any case doesn’t have much practical effect.  Mr. Mnuchin said he has had good conversations with his Chinese counterparts.

On growth, Mr. Mnuchin said that he believes that U.S. real GDP growth will improve to at least 3% by the end of 2018 due to Trump administration policies on tax reform, reduced regulation, and streamlined bank lending.  The Fed pegs the long-term U.S. potential GDP growth rate at only +1.8% due to slow labor force growth (due in part to baby boomers retiring) and low productivity.  Mr. Mnuchin undoubtedly offered the 3% growth rate prediction to boost consumer and business confidence and also to encourage more aggressive dynamic scoring for their budget plans.

Mr. Mnuchin did not say whether Mr. Trump at his State of the Union address this coming Tuesday evening will lay out the “pheromonal” tax plan that he promised on Feb 9 to deliver in 1-2 weeks.  On the controversial border adjustment tax plan, Mr. Mnuchin said that the administration is “looking seriously” at the plan.  He said the plan had some “very interesting” aspects but that he had some concerns including the upward impact it would have on the dollar.

We believe the stock market would react negatively to the unlikely event that the border adjustment plan gets approved by Congress since that tax system would put a big tax on imports, drive up the price of imported goods for U.S. consumers, bankrupt narrow-margin U.S. import businesses, and invite retaliatory measures from trading partners.  Moreover, by driving up the value of the dollar, the tax system would also cause a huge loss for U.S. individuals and businesses holding overseas assets and would cause increased dollar-debt defaults in emerging countries.  We believe the sooner the border adjustment tax idea dies, the better.  That would happen very quickly if the Trump administration decides not to support it. 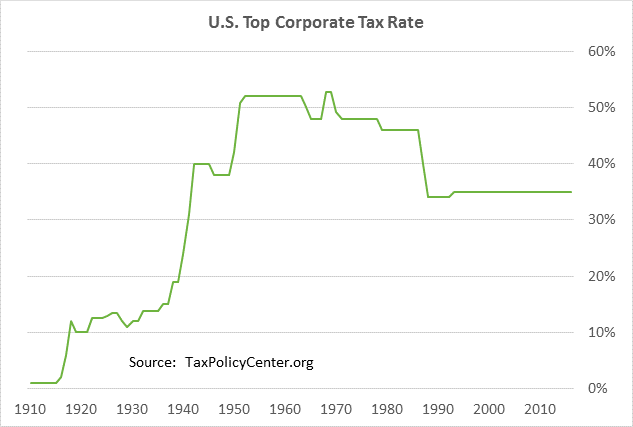 The U.S. consumer sentiment index after the Nov election moved sharply higher by +11.0 points in Nov-Dec to post a new 13-year high of 98.5.  Consumer sentiment was driven higher by (1) hopes for a stronger economy and tax cuts under the new administration, (2) the steady improvement in the U.S. economy and labor market in the second half of 2016, (3) continued low gasoline prices, and (4) the continued rise in U.S. home prices that has boosted household wealth.

However, consumer sentiment appears to have topped out for the time being as illustrated by the -2.8 point decline seen in the consumer sentiment index in early February.  Consumer confidence now seems to be on hold as consumers wait for tangible results from the Trump/Republican agenda.

Yet the good news is that strong consumer confidence in January translated into strong retail spending with January retail sales rising by +0.4% headline and +0.8% ex-autos.  That boost in consumer spending gives businesses confidence to boost their production and hiring, creating a virtuous cycle of higher increased employee wages and more consumer spending. 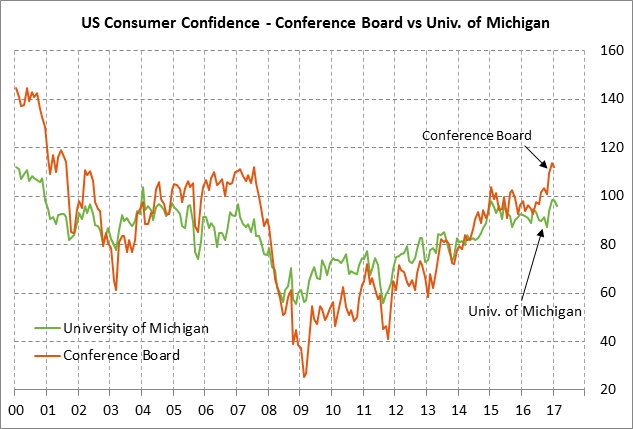 U.S. new home sales expected to rebound higher — The market is expecting today’s Jan U.S. new home sales report to show an increase of +6.5% to 571,000, recovering part of December’s -10.4% decline to 536,000.  New home sales in December were -14% below the 9-year high of 622,000 units posted in July 2016.  Demand for new homes remains generally strong, but the sales figures have been depressed lately in part by a mildly tight supply of new homes available for sale.  In December, there were 5.8 months worth of new homes available for sale, which is mildly below the long-term average of 6.1 months.

The main headwind for home sales, of course, is the +61 bp rise in the 30-year mortgage rate seen since the election to the current level of 4.15%.  However, mortgage rates remain historically low and will almost certainly be rising in coming years as the Fed raises interest rates, meaning now is still a good time to buy a home before rates rise even farther.  Higher post-election mortgage rates in our view are therefore not likely to be a major deterrent to buying a home. 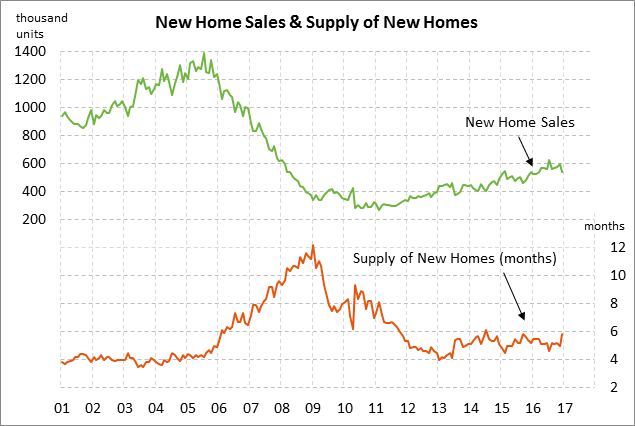