FOMC minutes not likely to suggest near-term Fed easing — The markets today will receive the minutes from the last FOMC meeting on April 30/May 1.  The post-meeting statement from that meeting was slightly dovish since it said that both headline and core inflation “have declined and are running below 2%.”  That was more dovish than the Fed’s previous language that headline inflation had fallen mainly due to energy prices and that core inflation was near the Fed’s inflation target of 2%.

The FOMC at that meeting also announced a -5 bp cut in the “interest on excess reserves rate” (IOER) to 2.35% from 2.40%.  The markets had been expecting that cut as a technical means to push the funds rate back down towards the middle of the Fed’s 2.25-2.50% funds rate target range.  In the lead-up to the FOMC meeting, the federal funds rate had risen as high as 2.45%, which was only 5 bp below the upper 2.50% limit of the Fed’s target range.  By cutting the IOER rate, the FOMC was trying to push the funds rate lower and also encourage banks to put more of their excess reserves into the federal funds market to boost the liquidity of a market that has withered in the post-crisis regime of massive excess reserve levels.

While the FOMC’s official announcements were slightly dovish, the markets reacted negatively to the meeting on balance since Fed Chair Powell in his press conference said that he didn’t see a case either way for a Fed rate change.  Mr. Powell was clearly trying to dampen market expectations for rate cuts in 2019 and 2020.  Mr. Powell also disappointed the markets in his press conference when he said that the recent weakness in the inflation statistics can be traced in part to “transitory” factors, which suggested that the Fed is in no hurry to cut interest rates based on a weak inflation outlook.

The market is expecting the Fed to ease due to (1) below-target inflation, and (2) expectations that U.S. economic growth will fade as 2019 wears on, particularly if there is no resolution of the US/Chinese trade war. 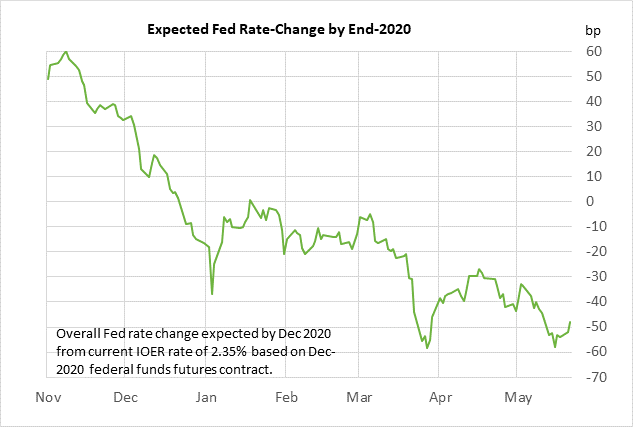 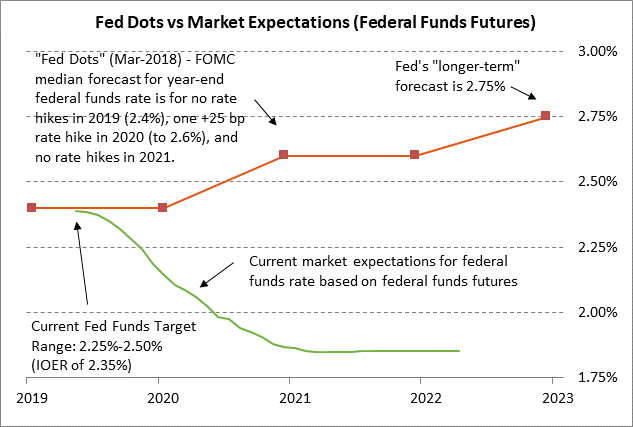 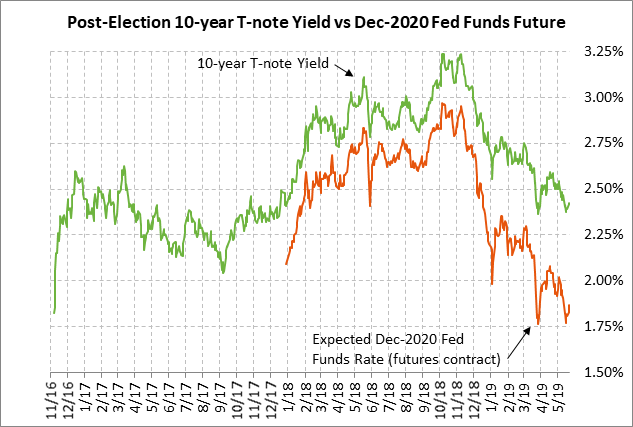 Washington is headed for fiscal showdown as budget and debt ceiling are bundled into one mess — Congressional leaders and White House officials met yesterday and indicated that a debt limit hike will likely be bundled with budget negotiations.  Washington could be headed for a difficult round of budget negotiations since the Trump administration, led by acting White House chief of staff Mulvaney, wants to allow sequestration to go into effect with sharp cuts in social spending.

House and Senate leaders from both parties, by contrast, are arguing for a 2-year renewal of current spending caps.  If the White House plays hard ball by demanding social-spending cuts, then the federal government might be headed for another shutdown when the new fiscal year begins on October 1 since the Democratic House is not likely to accept any large social-spending cuts.

The debt ceiling was reinstated on March 2 at $22 trillion.  The U.S. Treasury has already been forced to start using emergency measures to avoid exceeding the debt ceiling.  The Bipartisan Policy Center currently estimates that the Treasury will have enough cash to operate only until October or early November 2019 before running out of cash.  If Washington doesn’t raise the debt ceiling by the time the Treasury runs out of cash, then the Treasury will be forced to start defaulting on some of its financial obligations.  The default with the worst consequences, of course, would be if the Treasury were to miss a payment of interest or principal on a Treasury security, which would be the first time in history that the U.S. engaged in a sovereign debt default. 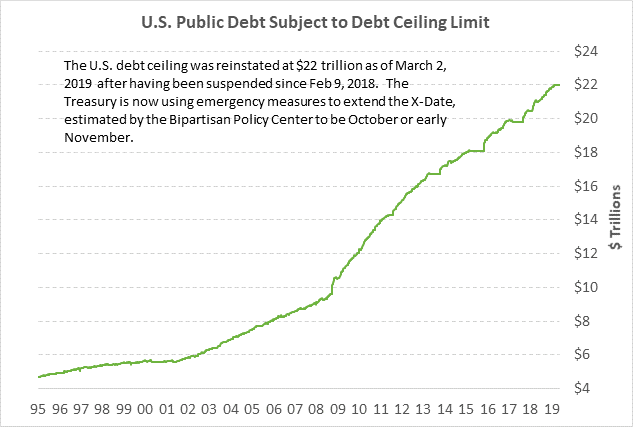 Cue the next Prime Minister as PM May’s latest gambit fails — Prime Minister May on Tuesday gave a speech in which she offered some revisions to her Brexit agreement such as offering to give Parliament a vote on whether to hold another public referendum.  However, Labour Party leader Corbyn quickly rejected the new proposal.  The deal was also rejected by hardline Brexiteers in the Conservative Party.  Ms. May is planning to hold a vote on her Brexit withdrawal agreement in the first week of June.  The chances of that bill passing appear to be nil.

Whether or not the withdrawal bill passes, Ms. May has said that in June she will offer a timetable for when she will resign, thus allowing the selection process to begin for the Conservative Party to choose a new leader and Prime Minister.  Boris Johnson is the odds-on favorite to become the next Prime Minister with a probability of 64%, according to PredictIt.org.  Mr. Johnson has already said he would accept a no-deal Brexit, which might well be the outcome on the October 31 deadline since Parliament will not agree to EU terms for a transition period.  In the no-deal case, the UK would leave the EU on October 31 without a UK-EU trade deal, meaning immediate WTO tariff levels and customs checks at all UK-EU border points. 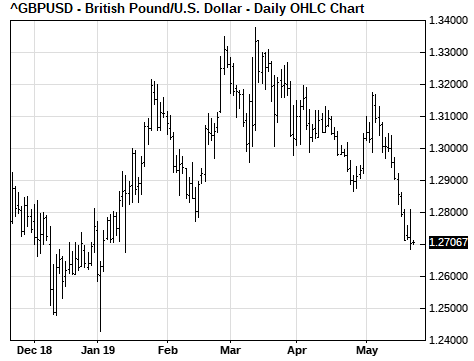