The U.S. stock market sold off sharply on Tuesday on USTR Lighthizer’s comments late Monday in which he said that tariffs would be raised to 25% from 10% on $200 billion of Chinese goods effective on Friday morning at 12:01 am.  That suggested that the Trump administration wants to go ahead with the higher tariffs and does not intend to give China much of a chance to avert the tariff hike.  The US/Chinese trade talks begin on Thursday, meaning the tariffs are due to go into effect early Friday morning at 12:01 AM before the second day of talks.

The good news for the markets is that China decided to go ahead with sending Vice Premier Liu to lead this week’s trade talks, which means that the U.S. and China will be talking at the highest levels and that Mr. Liu has at least a 1-day chance on Thursday of stopping the new tariffs.  However, China will undoubtedly take it as a serious affront if the U.S. raises tariffs in the middle of their 2-day talks.  With such treatment, Vice Premier Liu is not likely to be back in Washington anytime soon for more talks.  There may need to be a cooling-off period of weeks or even months before serious talks can get started again.

China will be under heavy domestic pressure to respond with retaliation if the Trump administration goes ahead with the higher tariffs on Friday.  China already has penalty tariffs on almost all the goods that it imports from the U.S.  However, China can raise the penalty tariff rates on those U.S. products and can also reverse the tariff cuts that it made on U.S. autos.  China can also crack down on high-profile U.S. companies that sell a high volume of products in China such as Apple, Procter & Gamble, Nike, Starbucks, McDonalds, etc.  If China retaliates for Friday’s tariffs, then the next domino might drop with President Trump going ahead with his threat to slap a 25% tariff on the remaining $325 billion of Chinese products.

If China does not quickly concede to U.S. demands on Thursday, then the US/Chinese trade war could quickly jump to maximalist levels with U.S. 25% tariffs on all Chinese products and with China slowing down the flow of nearly all U.S. exports to China and sales of U.S. companies within China.  That situation could last until the end of President Trump’s presidency, either in 2021 or 2025.  At that point, the U.S. and Chinese economies will have essentially disengaged with major damage for the global economy.  It is not at all clear that cooler heads will prevail. 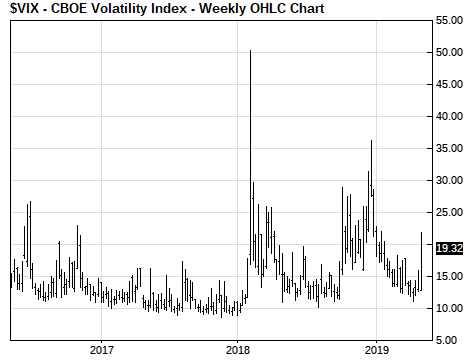 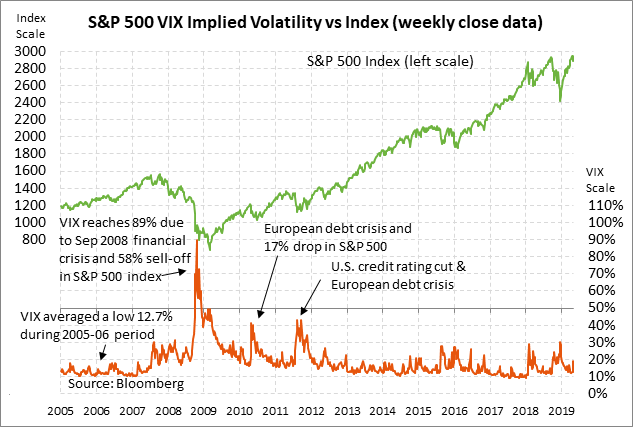 10-year T-note yield falls to 5-week low — The 10-year T-note yield on Tuesday fell to a 5-week low and closed the day -1.3 bp at 2.457%.  The 10-year yield has fallen by a combined -7 bp so far this week due to the Trump administration’s announcement that penalty tariffs will rise this Friday to 25% from 10% on $200 billion of Chinese products.  That tariff threat sparked safe-haven demand for Treasury securities and also boosted T-note prices by causing expectations for weaker global economic growth as the US/Chinese trade war worsens.

This week’s trade tensions have also produced more dovish expectations for Fed policy, providing another support factor for T-note prices.  Expectations for Fed rate cuts through the end of 2020 have risen by a total of 9 bp this week to 42.5 bp from 33.5 bp last Friday. 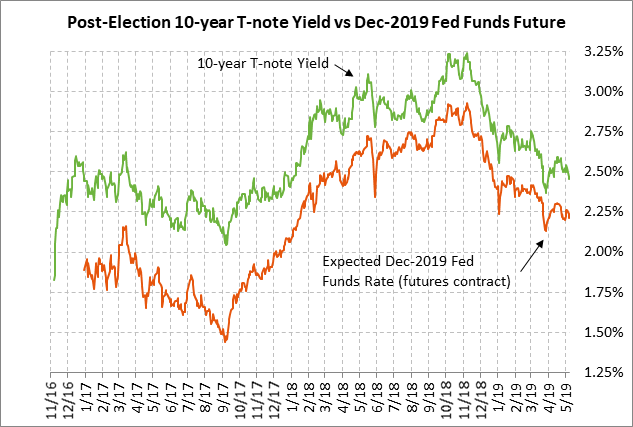 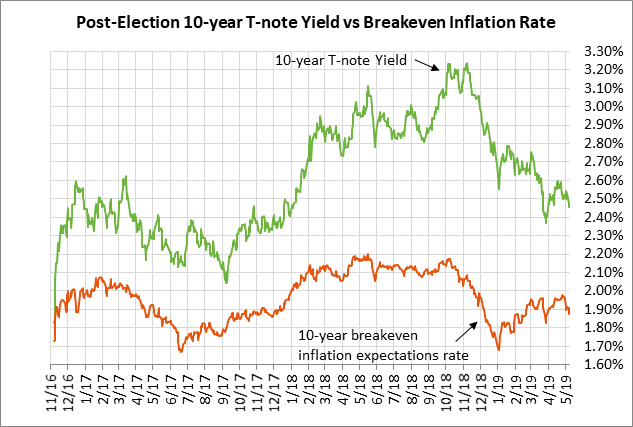 The 12-auction averages for the 10-year are as follows:  2.51 bid cover ratio, $21 million in non-competitive bids, 4.2 bp tail to the median yield, 24.6 bp tail to the low yield, and 45% taken at the high yield.  The 10-year is mildly above average in popularity among foreign investors and central banks.  Indirect bidders, a proxy for foreign buyers, have taken an average of 63.7% of the last twelve 10-year T-note auctions, which is mildly above the median of 61.6% for all recent Treasury coupon auctions.

Brexit cross-party negotiations are near an impasse — The Conservative and Labour parties on Tuesday resumed their negotiations over Brexit but Bloomberg reported that there was little progress and that the negotiations are close to an impasse.  Prime Minister May has a self-imposed deadline of Friday to reach an agreement.  If an agreement cannot be reached, then Parliament is planning to vote on a variety of Brexit options to see if there is a Parliamentary majority for any single plan.  So far, Parliament has been unable to pass any Brexit plan with a majority vote.  Ms. May seems to have little hope of getting Parliament to approve a Brexit withdrawal agreement before elections in two weeks on May 23 for the EU Parliament.  The only good Brexit news is that there is no chance of a chaotic no-deal Brexit until the new deadline of October 31. 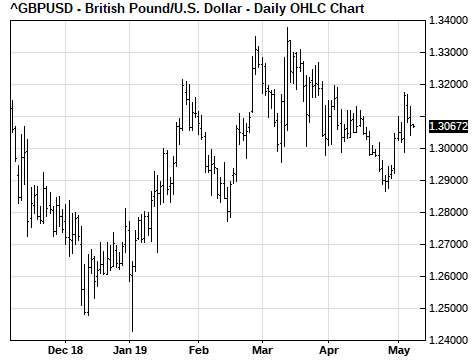