The dollar is showing strength on favorable interest rate differentials as the recent stock market correction has done little to dampen expectations for Fed rate hikes over the next year.  The market expectation for the Fed’s overall rate hike through the end of 2019 is currently at 72.5 bp, which is just mildly below the peak of 80 bp posted in early October.  While the market is expecting another three Fed rate hikes through the end of 2019, the market is not expecting the ECB to take even its first rate hike until late 2019.  The BOJ’s first rate hike is not likely until 2020. 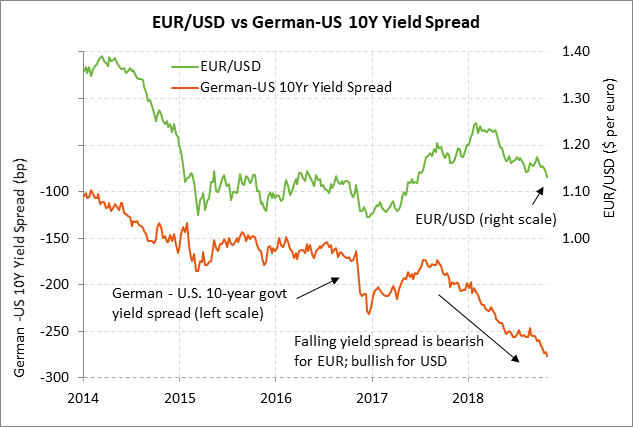 Weak Chinese PMI report illustrates negative impact of U.S. trade tensions — Tuesday night’s disappointing Chinese national Oct PMI report illustrated the increasing strains on the Chinese economy.  China’s Oct manufacturing PMI fell by -0.6 points to a 2-1/4 year low of 50.2, weaker than market expectations of -0.2 to 50.6.  There was also weakness in service sector confidence with the Oct non-manufacturing PMI falling by -1.0 to 53.9, weaker than market expectations of -0.3 to 54.6.

The weak Chinese PMI reports helped push the Chinese yuan on Wednesday to a new 10-1/2 year low of 6.9799 yuan/USD and a close of -0.12% at 6.9757.  The yuan is now only 0.35% away from challenging the psychological 7.0 yuan level, the breach of which could spark heavy yuan selling.  The Chinese Shanghai Composite index, by contrast, was able to rally by +1.35% on Wednesday due to higher global stocks and hopes for additional stock support measures from the Chinese government.

The outlook for China continues to depend heavily on the outcome of the Trump-Xi meeting on the sidelines of the Nov 30/Dec 1 G-20 meeting in Buenos Aires.  Bloomberg reported on Monday that Mr. Trump in early December will slap tariffs on the remaining $257 billion of Chinese products if the Trump-Xi meeting does not produce enough progress on trade. 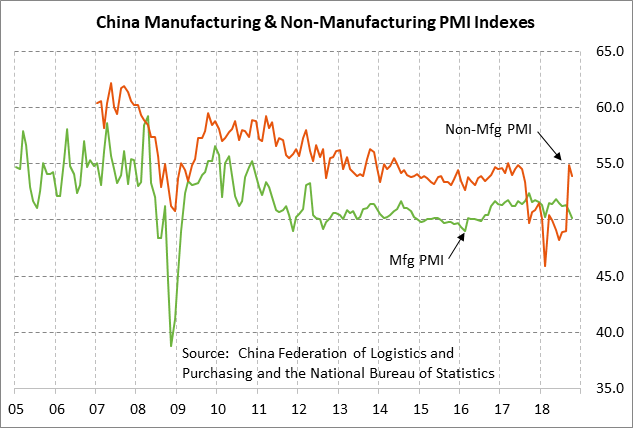 U.S. ISM index expected to continue lower from Aug’s 14-year high — The consensus is for today’s Oct ISM manufacturing index to show a -0.8 point decline to 59.0, adding to Sep’s -1.5 point decline to 59.8.  Even though the ISM index is expected to show a back-to-back decline, the index would still be in strong shape at only 2.3 points below August’s 14-year high of 61.3.  The ISM new orders sub-index in September fell by -3.3 points to 61.8, but that was only 5.6 points below the 14-3/4 year high of 67.4 posted in Dec 2017.  The U.S. manufacturing sector continues to see strong domestic demand due to the strong U.S. economy and continued support from the Jan 1 tax cuts. 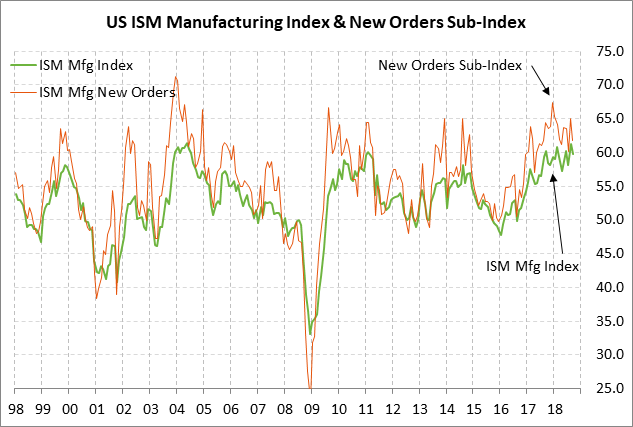 On the labor front, the market is mainly looking ahead to Friday’s Oct payroll report, which is expected to show a trend increase of +193,000, up from the weak Sep report of +134,000 that was caused in part by hurricane disruptions.  Yesterday’s Oct ADP report of +227,000 was substantially stronger than market expectations of +190,000.  The consensus is for Friday’s Oct unemployment rate to be unchanged from Sep’s 49-year low of 3.7%. 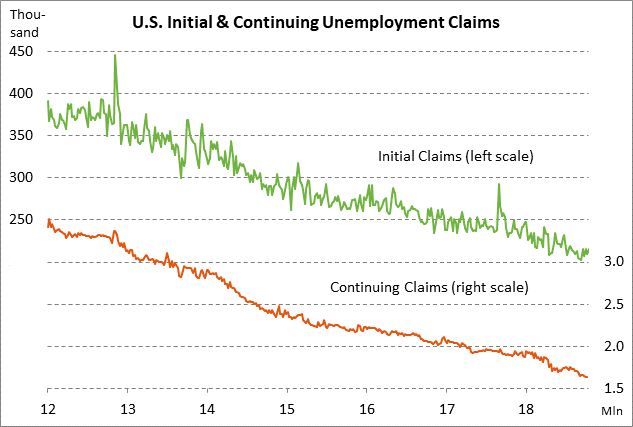 U.S. productivity expected to remain strong in Q3 — The consensus is for today’s Q3 non-farm productivity report to show another strong increase of +2.1% following Q2’s +2.9%, which would be well above the 8-quarter average of +1.2%.  U.S. productivity in the past two quarters has been boosted by stellar GDP growth of +4.2% in Q2 and +3.5% in Q3.  However, productivity is likely to slip in coming quarters once GDP growth fades towards +2% as the effects of the Jan 1 tax cuts dissipate. 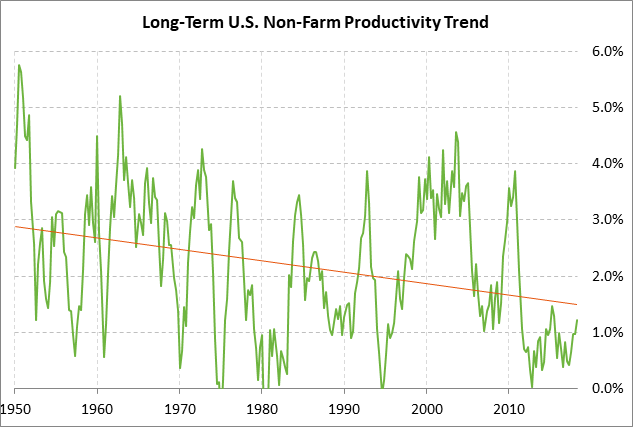