New 10-year low in the yuan fuels Chinese capital flight concerns — The Chinese yuan on Tuesday fell to a new 10-1/2 year low of 6.9741 yuan/USD and closed the day down -0.07% at 6.9672 yuan/USD.  The yuan would need to sell off by only another -0.47% from Tuesday’s close to challenge the psychological 7.0 yuan level.  The markets believe that the PBOC would put up a good fight to prevent the yuan from falling beyond 7 yuan.  However, if it turned out that the PBOC was unable to defend the 7.0 yuan level, then the yuan would likely show sharp additional losses on pile-on selling.

The yuan’s overall -12% plunge from March’s 3-year high has been caused by a combination of dollar strength and yuan weakness tied to US/Chinese trade tensions and the slowing Chinese economy.  The Chinese government has allowed the yuan to decline due to the negative fundamental factors behind the decline.  However, the Chinese government does not want the yuan to fall too far, or too fast, because that would attract fresh hostility from the Trump administration and would also encourage a new round of capital flight by Chinese investors.

Indeed, a sharp further decline in the yuan would undoubtedly spark fresh lows in the Chinese stock market as some investors try to liquidate their stock investments and move capital overseas.  If a new downward yuan-stock spiral occurs, the Chinese government would likely be forced to announce a new round of capital controls to prevent Chinese investors and businesses from shipping their cash out of China.

The outlook for China now depends heavily on the outcome of the Trump-Xi meeting on the sidelines of the Nov 30/Dec 1 G-20 meeting in Buenos Aires.  Bloomberg reported on Monday that Mr. Trump in early December will slap tariffs on the remaining $257 billion of Chinese products if the Trump-Xi meeting does not produce enough progress on trade.  Clearly, the clouds over China will become even darker if the U.S. goes ahead with slapping tariffs on all of its imports from China. 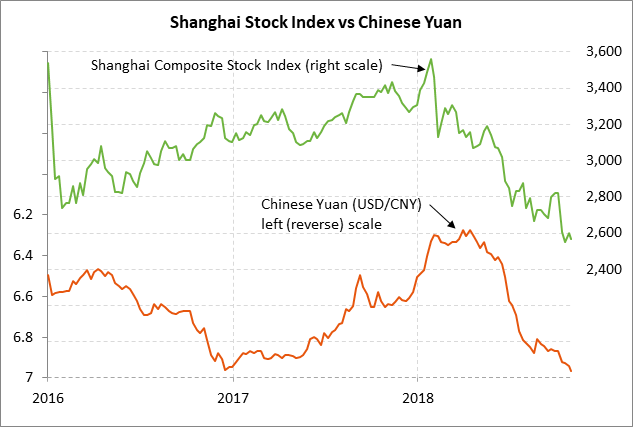 Weak Eurozone Q3 GDP report raises fresh concerns about Eurozone economy — Tuesday’s Q3 GDP report of +0.2% q/q (+0.8% annualized) was substantially weaker than market expectations of +0.4% q/q (+1.6% annualized).  The report was partially due to temporary factors such as the hit to the German auto industry from the failure to adjust to new emissions tests.  The market expects Europe’s GDP to recover to about +0.4% q/q in Q4 after the weak Q3 report.

Nevertheless, the weak Q3 GDP report suggested that underlying economic growth in Europe is slowing due in part to trade tensions and weaker exports.  The report increases the downside risks for the European economy, particularly if the Brexit or Italian budget situations worsen.  The European GDP outlook is not bad enough to knock the ECB off its plan to end its QE program on Dec 31 but the ECB may need to delay its first rate hike beyond Q3-2019 if the Q3 economic weakness bleeds into 2019.

Meanwhile, Italy’s populist government received some bad news on Tuesday with the report of zero growth in Italy’s Q3 GDP.  The stall in Italian economic growth comes at a particularly bad time as the government battles financial stress and high bond yields caused by the government’s intent to bust its budget relative to EU fiscal rules.

Tuesday’s weak GDP report caused the Italian government to argue that it is now even more important to use fiscal stimulus to kickstart the economy.  However, the weak GDP report also made it clear that Italy is very unlikely to reach the government’s forecast of +1.5% GDP growth in 2019.  That would mean that Italy’s actual 2019 budget deficit would almost certainly exceed the current forecast of 2.4% of GDP, attracting even more opposition to the budget from the European Commission.  Italy has until Nov 13 to reply to the European Commission’s demand for a narrower budget deficit.

The Italian 10-year bond yield on Tuesday rose sharply by +14 bp to 3.47% (i.e., 22 bp below mid-Oct 4-3/4 year high of 3.69%) due to lackluster demand for Italy’s bond sale on Tuesday and due to increased concern about Italy’s fiscal outlook after the weak Italian Q3 GDP report of zero. 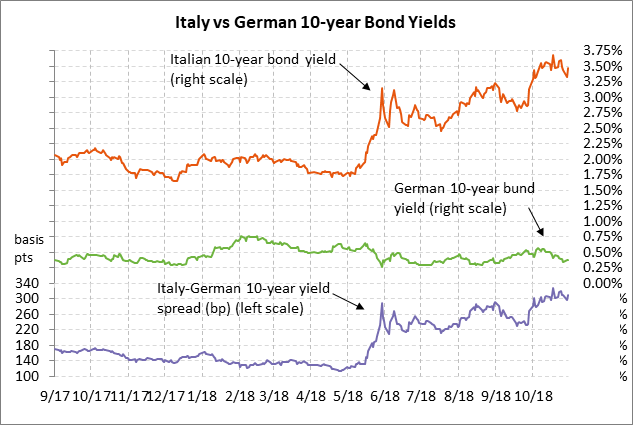 ADP employment expected to match trend — The market consensus is for today’s Oct U.S. ADP employment report to show an increase of +190,000, down from Sep’s strong report of +230,000, but close to the 12-month trend of +193,000.  U.S. job hiring remains surprisingly strong despite the fact that there is a shortage of qualified applicants and that U.S. businesses have already hired a net 19.8 million new people since the end of the Great Recession. 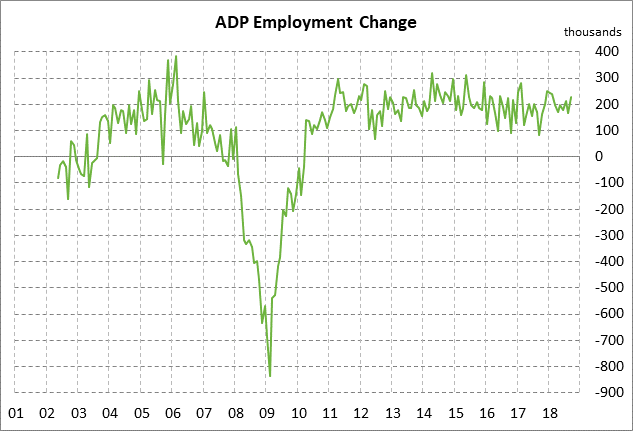 U.S. employment costs expected to show strength — The consensus is for today’s Q3 employment cost index to show a strong increase of +0.7% q/q (+2.8% annualized) up from Q2’s +0.6% report (+2.4% annualized).  The expected ECI strength is positive for consumer confidence and spending, but negative for corporate profits.  The +2.8% y/y increase seen in Q2 was the largest increase in 10 years. 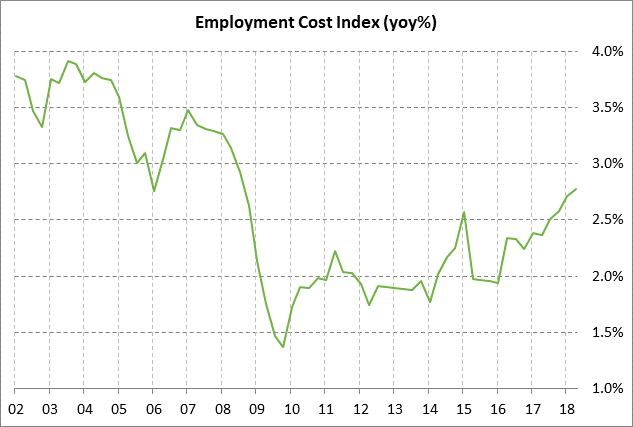 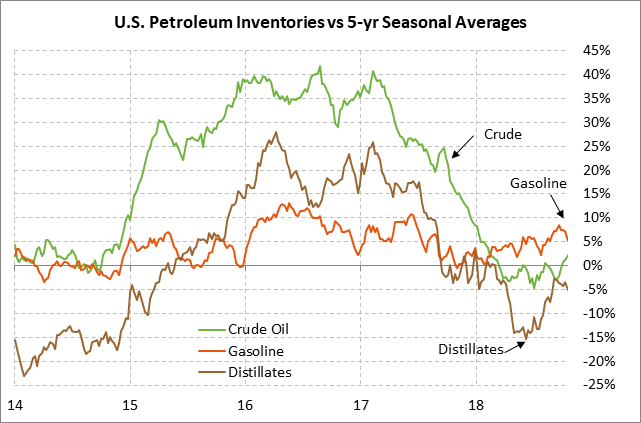