Weekly U.S. market focus — The U.S. markets this week will focus on (1) whether the global stock market correction resumes, (2) Washington politics ahead of next Tuesday’s U.S. mid-term elections, (3) Friday’s Oct unemployment report (payrolls expected +193,000 and unemployment rate expected unchanged from Sep’s 49-year low of 3.7%), and (4) anticipation of next week’s FOMC meeting, which is expected to produce an unchanged policy ahead of another +25 bp rate hike at the following meeting in December.

Washington politics will be front and center this week with the recent political violence and with next Tuesday’s U.S. mid-term elections.  The mid-term elections will determine whether the Democrats will gain control of the House along with its investigatory committees.  The polls suggest that the Democrats will take control of House but that the Republicans will keep control of the Senate.  The markets will also be on guard to see whether President Trump next week after the election fires any top Justice Department officials with an eye towards affecting the Mueller investigation.

The markets will continue to closely monitor US/Chinese trade tensions.  There is a tentative agreement for Presidents Trump and Xi to meet while they are at the G-20 meeting in Buenos Aries on Nov 30/Dec 1.  There were reports last week that the U.S. may refuse to discuss trade at that meeting.  The Trump administration reportedly wants China to make a proposal on IP and forced technology transfers before the U.S. will agree to even discuss trade.  Nevertheless, there is some outside hope that Presidents Trump and Xi at their G-20 meeting might agree to formal negotiations and a tariff ceasefire, similar to the recent US/EU and US/Japan agreements. 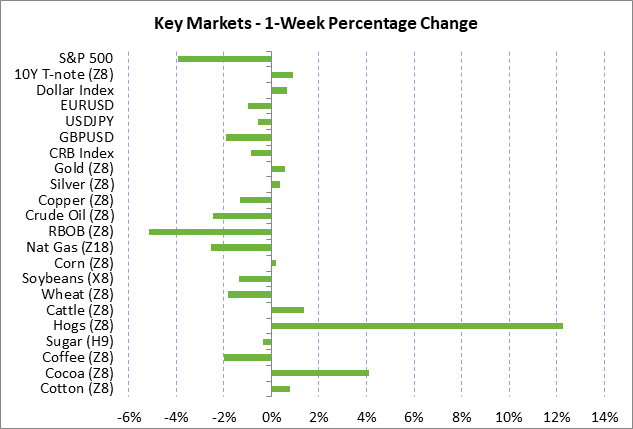 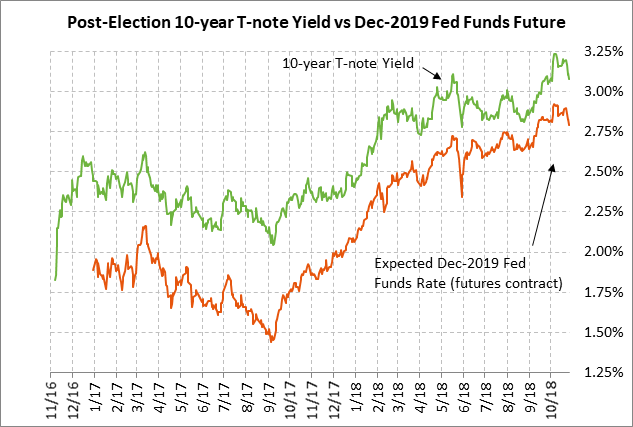 European and Asian focus — The European markets this week will focus on the Italian budget, the UK budget presentation on Monday, the BOE meeting on Thursday, and German politics after German Chancellor Merkel’s CSU party had another poor showing in Sunday’s election in the state of Hesse.  The consensus is for Tuesday’s Eurozone Q3 GDP to show an increase of +0.4% q/q and +1.8% y/y following Q2’s +0.4% q/q and +2.1% y/y.

The Italian bond market may show some relief today after S&P late last Friday did not downgrade Italy’s credit rating from BBB (2 notches above junk) although it did change its outlook to “negative” from “stable.”  The markets are waiting to see if Italy within the next two weeks will reduce its 2019 budget deficit from 2.4% of GDP to meet the European Commission’s demands and thus dial down the EU/Italian tensions over the budget.

In Asia, the markets will key on China’s stock market and China’s PMI reports on Tuesday and Wednesday nights, which are expected to be steady to slightly weaker.  The Bank of Japan at its 2-day meeting on Tue/Wed is expected to leave its policy unchanged.

Markets wait to see if global stock market correction resumes — The Chinese stock market has led the global markets lower in recent weeks, although the Shanghai Composite index last week was able to hold above its mid-Oct 3-3/4 year low while the U.S., European and Japanese stock markets fell to new lows.  The S&P 500 index last week fell to a new 5-3/4 month low and closed the week down -3.94%.  In recent weeks, the world’s main stock markets have fallen sharply from their respective highs by totals of:  S&P 500 index -10.6%, Euro Stoxx 50 -16.7%, Nikkei -14.2%, Shanghai Composite -31.7%.

The U.S. stock market fell sharply in the past several weeks due to (1) hawkish Fed comments, (2) peak U.S. earnings and concern about narrower margins due to tariffs and materials costs, (3) concern about China, (4) strength in the dollar, and (5) Washington politics.  The main supportive factor is more attractive valuations with the SPX forward P/E now at 16.3, down from 20 early this year and below the 5-year average of 17.5, although it is still above the 10-year average of 15.7. 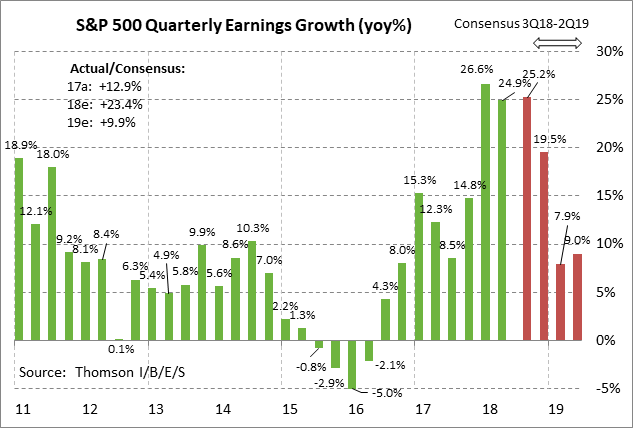