FOMC minutes will be watched for Feds’ stance versus the neutral rate — The FOMC today will release the minutes from its last meeting on Sep 25-26.  The FOMC at that meeting met unanimous market expectations by raising its funds rate target by +25 bp to 2.00%/2.25% for the third rate hike of the year.  The FOMC at the meeting left its Fed-dot forecasts mostly unchanged except for raising the median estimate of the long-term neutral rate to 3.0% from 2.9%.

The big question for the markets now is whether the Fed will push the funds rate above the 3.0% neutral rate to 3.38% by the end of 2020, as the Fed dots suggest.  The market continues to be substantially more dovish with their expectation for the Fed to stop raising rates at about 2.9% by the end of 2019.

We suspect that the FOMC in early 2019 will continue its pattern of raising interest rates at every other FOMC meeting, implying rate hikes at the March and June meetings.  The Fed can then pause in mid-2019 to reassess whether the U.S. economy is so strong that it needs to be curbed with an above-neutral rate.

Of course, it remains to be seen whether the U.S. and global economies will be strong enough to survive another 75-100 bp of rate hikes.  The U.S. stock market is already showing some stress from higher rates and the U.S. housing market is being undercut by higher mortgage rates.  Another 75-100 bp of rate hikes will also put upward pressure on the dollar and more stress on overseas nations, particularly the emerging markets.

The other big variable is trade tensions.  If President Trump makes a trade deal with China after the November elections, then the Fed will feel more comfortable about raising interest rates in 2019.  However, if US/Chinese trade relations deteriorate further, then the Fed may have to delay its rate hikes as U.S. and Chinese economic growth slows and as the Chinese markets likely show continued weakness. 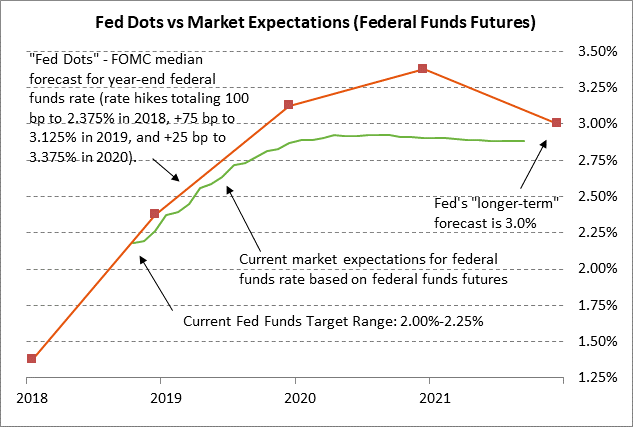 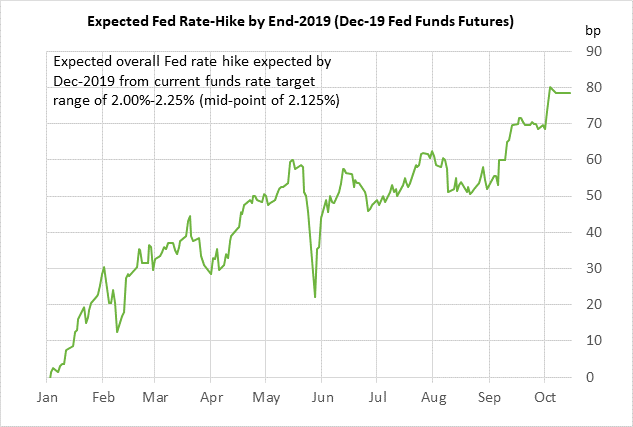 U.S. housing starts in September were in remarkably good shape at only 4% below January’s 11-year high of 1.334 million units.  However, housing starts are likely to ease in coming months as home demand slacks off due to the worst home affordability seen in 10 years.  There may be some weakness in September housing starts in particular due to Hurricane Florence, which likely slowed home construction plans in the flooded North Carolina region.

On a more positive note, the National Association of Home Builders yesterday reported that its housing index rose by +1 point to 68, which was better than expectations of unchanged at the 1-year low of 67 seen in Aug-Sep.  The NAHB index is down by 6 points from December’s 19-year high of 74 but is still at a very strong level from an historical perspective, illustrating continued optimism among U.S. home builders. 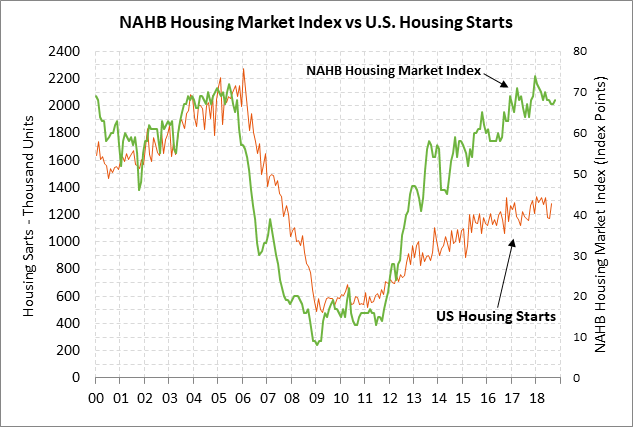 The Italy bond yield eased a bit on Tuesday after the Italian government late Monday night approved its budget and submitted it to the European Commission just before the deadline.  The budget was the same as proposed over the past two weeks with a deficit of -2.4% of GDP in 2019 falling to -2.1% in 2020 and -1.8% in 2021.  The actual deficits will likely turn out to be higher than the forecasts due to the rosy GDP forecasts that are built into the estimates.  The proposed 2019 budget deficit of -2.4% of GDP is three times higher than the previous government’s intent for a deficit of -0.8%.  The budget forecasts that the national debt ratio will fall from 130.9% of GDP this year to 130% in 2019 and 128.1% in 2020.

The ball is now in the European Commission’s court.  The Commission has a week to determine whether Italy’s budget breaches the EU’s rules.  If so, then the Commission can issue a negative opinion and ask Italy to submit a revised budget within two weeks.  That rejection procedure has never been used before since the Commission in the past has generally let Eurozone countries temporarily exceed deficit limits.  Based on the rhetoric seen thus far, Italy’s populist government could respond with a fire storm if the Commission rejects its budget and simply refuses to comply, likely sending the Italy bond yield spread to new highs.