Weekly U.S. market focus — The U.S. markets this week will focus on (1) whether the U.S. and global stock markets can regain their balance after last week’s sharp sell-off, (2) whether the recent rise in T-note yields has been capped for the time being by last week’s stock market correction, (3) whether Fed officials in appearances this week show any cracks in their intent to raise interest rates due to the wobbly stock market and whether President Trump voices any new objections to Fed rate hikes, (4) trade tensions and whether the U.S. and China can finalize a meeting between Presidents Trump and Xi at the G-20 summit in Buenos Aries starting on Nov 30, (5) the Nov  6 mid-term elections in just three weeks with implications for control of Congress and any post-election firings of Justice Dept officials affecting the Mueller investigation, and (6) oil prices, which took a hit last week on the stock market correction but which could be boosted by a Saudi Arabia oil response to any sanctions over the Khashoggi disappearance.

The markets hope that the U.S. Treasury will not name China as a currency manipulator in its twice-yearly report that could be released this week.  Bloomberg reported last week that the Treasury staff has concluded that China is not manipulating its currency, but Treasury Mnuchin or President Trump could overrule that conclusion.  A Treasury conclusion that China is a currency manipulator would splash more gasoline on US/Chinese trade relations. 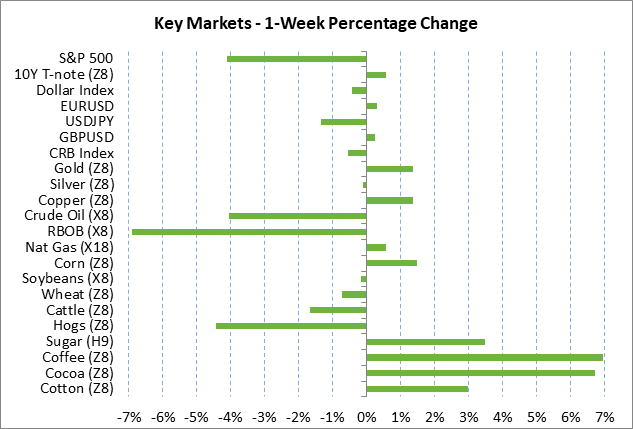 The head of Saudi state-owned TV network Al Arabiya said on Sunday said that if the U.S. sanctions Saudi Arabia, “no one should rule out the oil price jumping to $100, or $200, or even double that figure.”  The world oil market is already facing tighter supplies from the one-third drop in Iranian oil exports seen so far ahead of full U.S. sanctions on Iran on Nov 5.  Saudi Arabia could easily push oil prices sharply higher simply by refusing to continue with its production boost to offset lower Iranian oil production.

The European markets will also respond to Italy’s submission today of its 2019 budget and whether EU officials will reject it as out of compliance with Eurozone fiscal rules.  The markets are hoping that the EU will reluctantly accept Italy’s budget because they are afraid of an ugly showdown if the EU begins the excessive deficit procedure.  The Italian-German 10-year bond yield spread last Friday rose to a new 5-1/2 year high of 308 bp.

On Brexit, the EU and UK will apparently miss Monday’s self-imposed deadline for a Brexit divorce deal, which was set so that the EU at this week’s 2-day summit (Wed-Thu) could decide whether to call a special EU summit for November to ratify a Brexit deal.  There were reports Sunday afternoon that the EU/UK talks were deadlocked, suggesting Monday’s deadline will be missed. 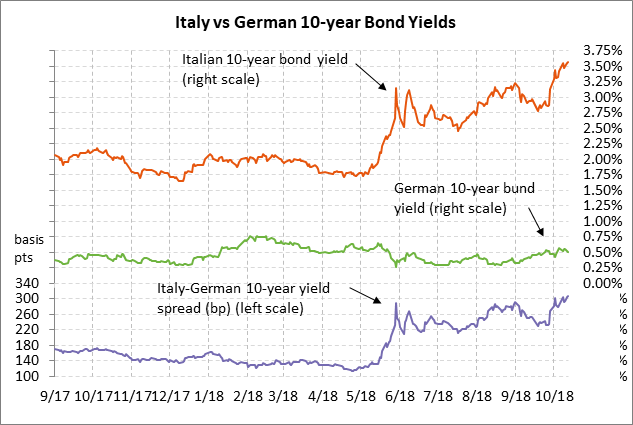 Asia markets to focus on Chinese stocks and economic data — The Asian markets this week will focus mainly on Chinese stocks as the Shanghai Composite index last week plunged to a new 3-3/4 year low and closed -7.6% lower on the week.  The index has now corrected lower by a hefty -29.28% from January’s 2-3/4 year high.

The markets are expecting Thursday’s Q3 Chinese GDP report to ease just slightly to +6.6% from Q2’s +6.7%, but the markets will be on guard for any unexpected weakness from trade tensions.  Other Chinese economic data includes Monday’s China Sep CPI (expected +2.5% vs Aug’s +2.3%), Thursday’s Sep industrial production (expected +6.0% vs Aug’s +6.1%) and Sep retail sales (expected unch from Aug at +9.0% y/y), and Friday’s Sep new home prices.

U.S. Q3 earnings week begins with strong expectations but with worries about tariff effects— Q3 earnings season begins in earnest this week with 54 of the S&P 500 companies scheduled to report.  Notable reports include Bank of America on Monday; Goldman Sachs, Morgan Stanley, IBM, and Netflix on Tuesday; US Bancorp and Abbott Labs on Wednesday; Amex and PayPal on Thursday; and Procter & Gamble, Honeywell, and Schlumberger on Friday.

The consensus is for another quarter of stellar SPX earnings growth in Q3 of +21.5%.  However, that would be down from peak growth of +26.6% in Q1.  In addition, the markets are nervous about any warnings in management earnings calls about lower profit margins caused by tariffs.  On a calendar year basis, the consensus is for earnings growth to downshift to +10.3% in 2019 after stellar growth of +23.1% in 2018 from the Jan 1 tax cuts. 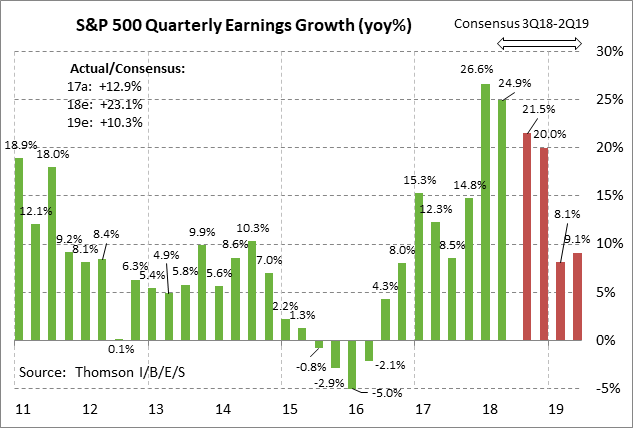 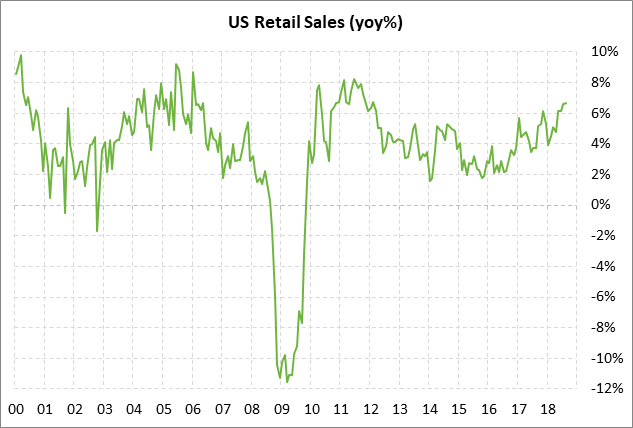