Today’s auctions will test investor demand with Treasury yields near new highs — The Treasury’s sale of 3-year and 10-year T-notes today and 30-year bonds tomorrow will provide a test about whether investors see value after last week’s surge in T-note yields, or whether a further rise in yields may be necessary for the Treasury to unload its securities.  The benchmark 3-year T-note yield late yesterday was trading at 2.98% and the 10-year yield was trading at 3.20%.

The 10-year T-note yield reached a new 7-1/2 year high of 3.26% yesterday but then fell back to close the day -3 bp at 3.20%.  The yield is still up by +14 bp since last Tuesday on the combination of (1) increased expectations for Fed rate hikes and recent hawkish Fed comments, (2) strong U.S. economic data including the drop in the unemployment rate to a 49-year low of 3.7%, and (3) higher inflation expectations.  The current 10-year breakeven inflation rate of 2.17% has risen by 4 bp in the past week due in part to last week’s surge in crude oil prices to a new 4-year high. 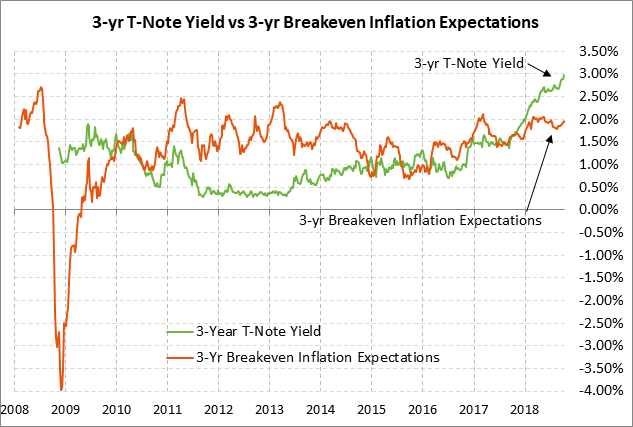 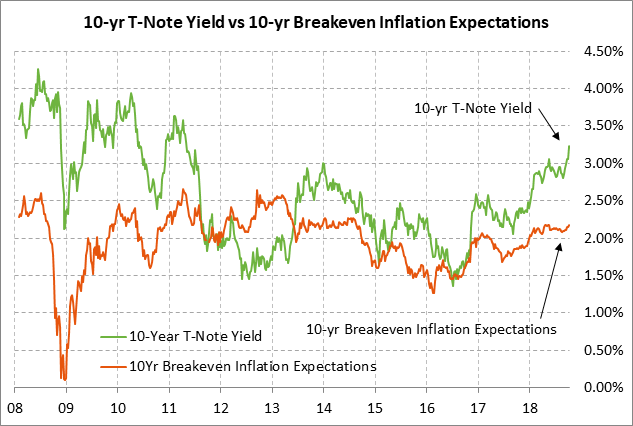 The Treasury market would be particularly pleased if today’s core PPI and tomorrow’s core CPI reports showed continued moderation.  That would suggest that the T-note market might be overdoing its inflation concerns.  The 10-year breakeven inflation expectations rate late last week rose to a 4-1/2 month high of 2.18% but then eased slightly to 2.17% on Tuesday.

Considering the moderation of the August inflation statistics, the main reason behind the recent rise in inflation expectations was last week’s new 4-year high in oil prices.  In addition, the market remains worried about wage inflation with last Friday’s Sep average hourly earnings report of +2.8% y/y, which was just 0.1 point below August’s 9-year high of +2.9%.  As long as the actual inflation statistics remain contained, however, the market does not have much reason to become overly concerned about the inflation outlook. 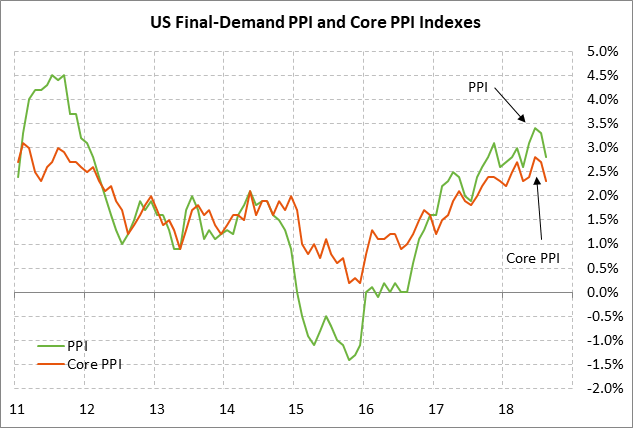 The Italian bond yield on Tuesday fell mildly after Italian Finance Minister Tria appealed for calm and Italy’s populist leaders refrained from launching any new broadsides against EU officials.  League leader Salvini on Monday called top EU officials “enemies of Europe.”  Still, there is no sign that the populist government plans to back down from their 2019 draft budget deficit of 2.4% of GDP even if EU officials demand changes.  In addition, there are rumors in the markets that the government is willing to see a Italian-German bond spread as high as 400 bp before they begin to panic, which is about 50 bp higher than current levels.

Italy’s parliament is debating the budget this week and must approve the budget before this Monday’s deadline for submission to the European Commission.  The Commission then has up to two weeks if it wishes to demand budget changes to conform to Eurozone’s fiscal rules.