Oil prices hit new 4-year high as concerns mount about falling Iranian exports — Nov WTI crude oil futures prices on Tuesday rose to a new 4-year high on the nearest-futures chart of $75.91 per barrel, while Nov Brent crude oil futures consolidated below Monday’s 4-year high of $85.45.  The premium of Brent over West Texas Intermediate is very high at nearly $10 per barrel because international-benchmark Brent oil prices are being boosted by the decline in Iranian oil exports and tighter global oil supplies, while the record level of U.S. oil production is keeping a lid on domestic U.S. WTI oil prices.

Iranian oil exports have already plunged by -900,00 bpd (-36%) to 1.6 million bpd from April’s peak of 2.5 million bpd as foreign oil buyers shun Iranian oil ahead of full U.S. sanctions that take effect in November.  After full sanctions take effect, Iranian oil exports will continue to fall sharply.  The Trump administration says it will allow virtually no exceptions to the sanctions, although some buyers such as China have work-arounds and will be able to keep buying Iranian oil.  Oil prices have rallied on concern that global oil supplies will continue to tighten through year-end since Saudi Arabia is the only country with any significant excess capacity to use to boost production and offset the decline in Iranian exports. 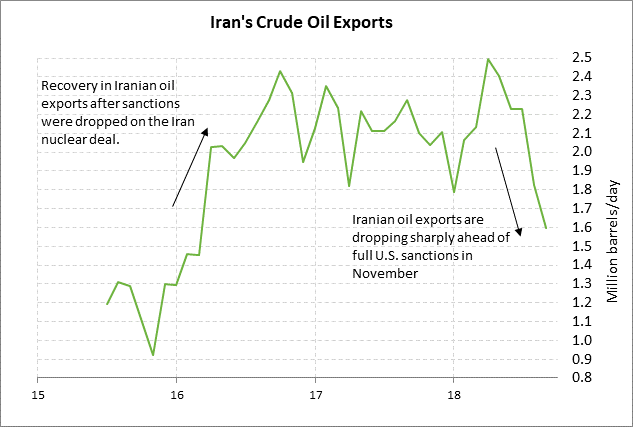 U.S. ADP employment expected to remain solid — The market consensus is for today’s Sep ADP employment report to show an increase of +184,000.  The expected report would represent an improvement from Aug’s soft report of +163,000 but would remain mildly below the 12-month trend-average of +190,000.  Today’s ADP report is likely to be depressed to some extent by Hurricane Florence, which caused major business disruptions in mid-September in the North Carolina region.

On the labor front, the market is mainly looking ahead to Friday’s Sep unemployment report where payrolls are expected to show a respectable increase of +184,000, though down from Aug’s +201,000.  Job growth continues to hold up very well despite the difficulty that some businesses are having in finding qualified workers in the tight job market.  Job growth also remains strong even though U.S. businesses have hired a net 19.5 million new employees since the Great Recession ended.

The Sep unemployment rate on Friday is expected to fall by -0.1 point to 3.8%, thus matching the 48-year low posted in May.  The consensus is for Sep average hourly earnings to ease slightly to +2.8% y/y from August’s 9-year high of +2.9%.  If the earnings report does not ease a bit as expected, then the markets will become more concerned about wage-push inflation. 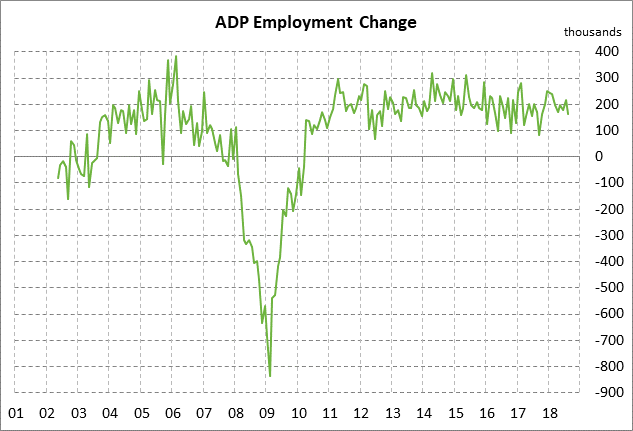 U.S. business confidence remains very strong due to (1) the strong Q2 GDP rate of +4.2%, (2) the generally solid global economy, and (3) flush cash positions from the Jan 1 tax cuts.  Negative factors include (1) tariffs, (2) high gasoline prices, and (3) political worries.  Sunday’s NAFTA 2.0 agreement will be a big positive for U.S. business confidence in the October statistics, although there is still considerable worry that the US/Chinese trade war is likely to get significantly worse in coming months. 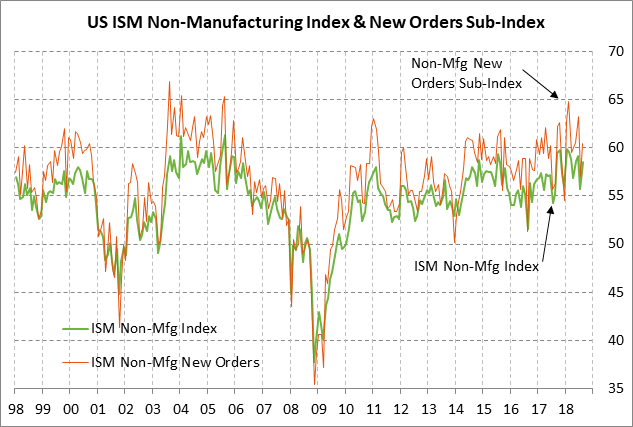 Italian 10-year yield reaches another new 4-1/2 year high as Italian officials continue to disregard market forces — The Italian stock and bond markets on Tuesday extended the sharp sell-offs seen since last Friday when news emerged of a 2019 budget deficit of 2.4% of GDP.  The deficit is expected to remain near 2.4% in 2020 and 2021 as well, which would further swell Italy’s massive debt that is already above 130% of GDP.

The markets became more concerned about the Italian situation on Tuesday after Claudio Borghi, head of the lower house budget committee, said in a radio interview that the euro was “not sufficient” to solve Italy’s problems, implying that Italy should dump the euro.  Mr. Borghi later walked back that comment by telling Bloomberg TV that “There is no plan to leave the euro within this government regardless of my personal conviction.”  He added that “we are not mad” and “we are not Venezuela.” 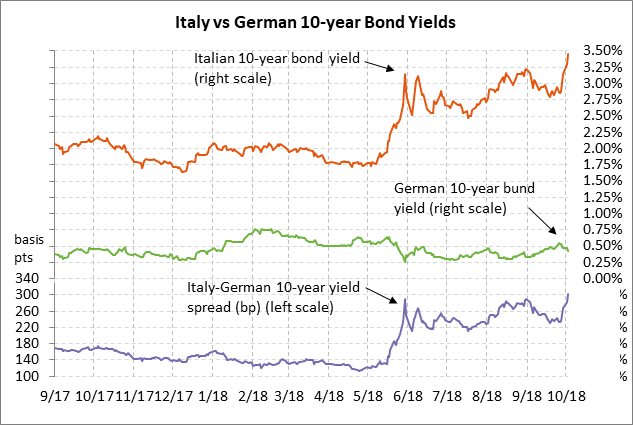