Indeed, the PCE deflator may show some upward pressure in coming months from the rally in oil prices to new highs and from higher prices caused by tariffs.  However, the Fed can look through both those factors because they are not monetary-policy driven inflation events but are instead special one-time factors.  Both can actually be considered anti-inflationary over the longer-term since higher prices from tariffs suggest reduced demand (i.e., reduced economic growth) and since the more money that consumers spend on gasoline, the less money they spend on other goods.

In any case, the Fed has explicitly said that it is willing to allow the PCE deflator to move somewhat above its 2.0% target since the inflation target is symmetrical.  Indeed, the FOMC itself is forecasting that the headline and core PCE deflators will both move sideways at +2.1% during 2019 and 2020.  The markets therefore will not panic if today’s PCE deflator report is a bit stronger than expected.

Regarding inflation expectations, the market currently believes that inflation will be mildly above the Fed’s +2.0% inflation target over the next ten years, but that inflation is not about to get out of hand.  The 10-year breakeven rate is currently at 2.15%, which is at the upper end of the June-Sep range but is below May’s 4-year high of 2.21%. 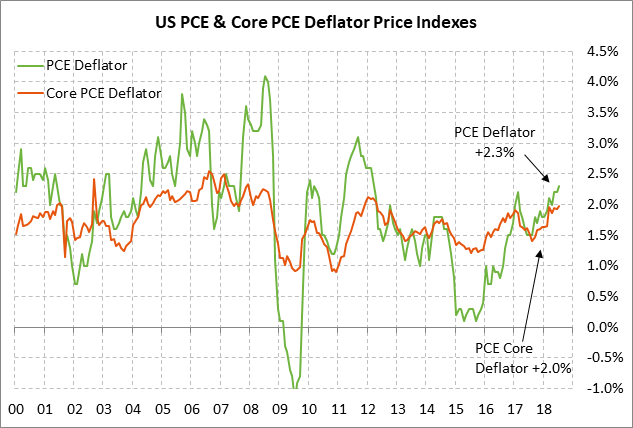 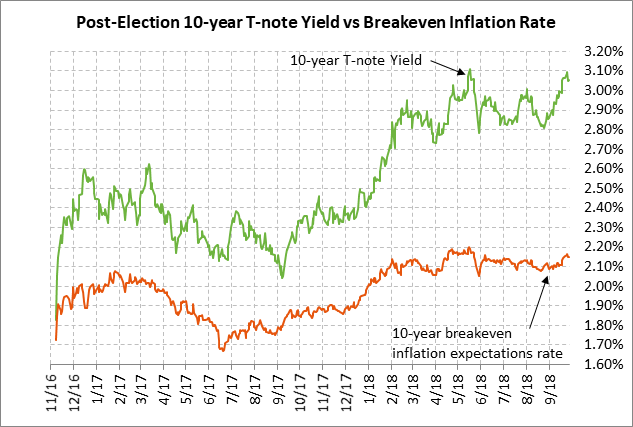 U.S. consumers are in strong shape from an income and tax-cut stance and are spending their money freely, thus giving the economy a boost.  Personal spending contributed a hefty 2.55 percentage points to the very strong Q2 GDP report of +4.2%.  Consumer spending remained strong in Q3 with GDPNow expecting spending to contribute 2.54 points to their strong Q3 GDP forecast of +3.8%.  The market consensus is for Q3 GDP growth of +3.0%. 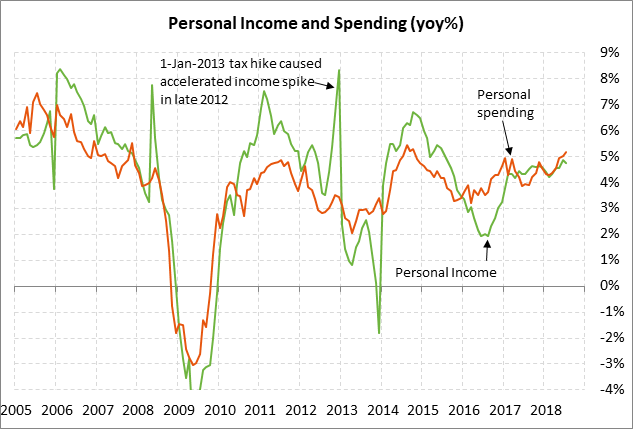 U.S. consumer sentiment expected to remain stellar — The market is expecting today’s U.S. consumer sentiment index from the University of Michigan to remain very strong with only a small -0.3 point downward revision from early-Sep’s 6-month high of 100.5.  The index in early-Sep was only -0.9 points below March’s 14-1/2 year high of 101.4.  The index in the prelim-Sep report rose sharply by +4.6 points to 100.8.

U.S. consumer confidence is being supported by (1) the very strong U.S. economy with Q2 GDP growth of +4.2%, (2) the strong labor market with the unemployment rate near a 5-decade low, (3) strong personal income with growth of +4.7% y/y in July, and (4) rising household wealth with the record highs in the stock market and the sharp post-recession rise in home prices.  Negative factors for consumer confidence include (1) the Fed’s rate-hike regime and rising mortgage rates, (2) political uncertainty in Washington, and (3) high gasoline prices. 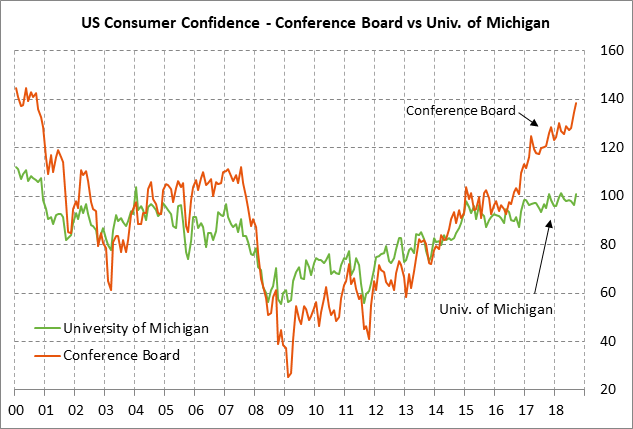 Italy budget deficit of 2.4% is higher than the markets hoped but is at least under the 3% Eurozone limit — Italy’s government earlier this week appeared to be moving towards a 2019 budget deficit of 1.9%-2.0% of GDP, which the markets would have considered as favorable under the circumstances.  However, Five Star was able to prevail at the end in getting 10 billion euros for their promise for a minimum citizen’s income, which pushed the deficit up to 2.4% of GDP.  The deficit of 2.4% is at least well below Eurozone’s 3% deficit rule even if it will cause the overall Italian national debt to rise.  As long as the Italian parliament finalizes a 2019 budget with a 2.4% deficit by December, the markets will have gotten out this budget mess relatively unscathed. 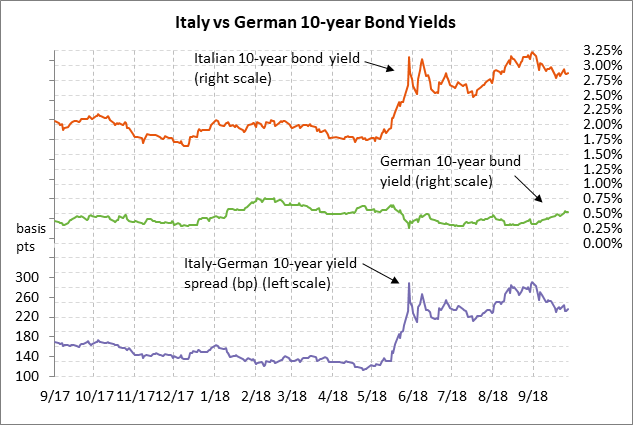